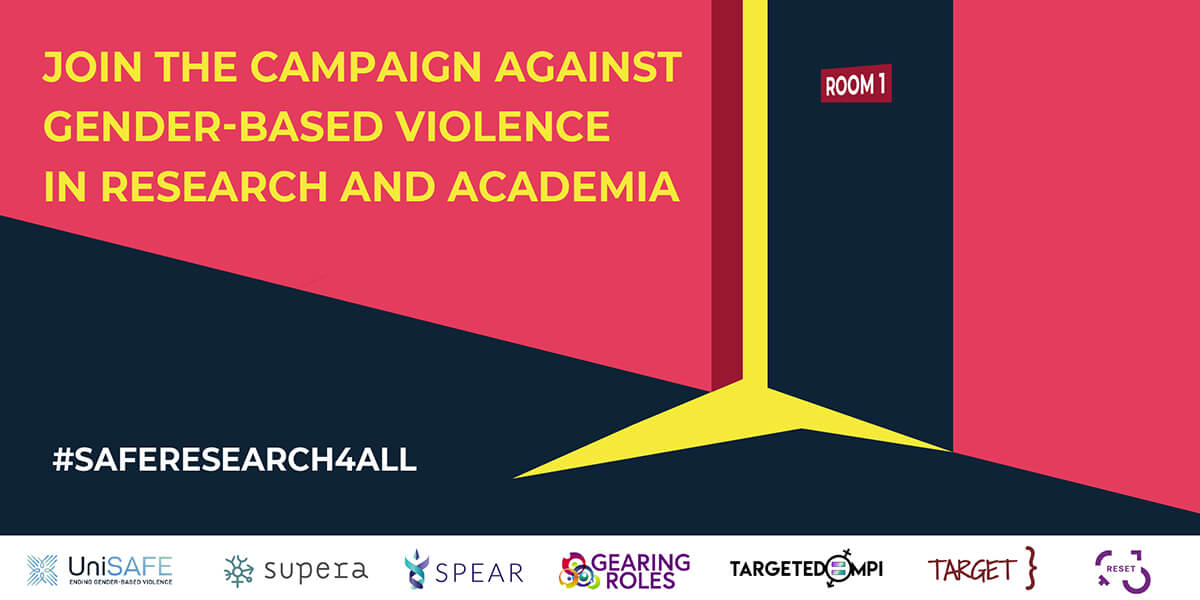 Leveraging on the International day for the Elimination of violence against women (25 November), the UniSAFE project is joining forces with sister projects involved in structural change for gender equality in research and academia (SUPERA, SPEAR, TARGET, TARGETED-MPI, GEARING ROLES) as well as with other interested sister projects, organisations, and individuals, to raise awareness on gender-based violence in research and academia through a campaign running between 22 and 29 November.

Gender-based violence is a complex, prevalent, persistent feature and force in many organisations, with pandemic proportions. Violence, violations, and abuse may be physical, sexual, economic/financial, psychological – online or offline – and can include gender or sexual harassment.

Universities and research organisations are not exempt from this pandemic. Specific organisational structures can even create conditions for hierarchies of power that are structured by gender and age and regularly underpin violence. While gender-based violence deeply impacts individual lives, it also has serious social, economic, and health repercussions on organisational and social levels.

Despite the scale, the political significance and the growing interest in academia, gender-based violence in research organisations remains largely under-reported and under-researched. It also often remains unspoken.

From 22 to 29 November, all projects, organisations, and individuals intent on eradicating gender-based violence in academia and research organisations are invited to actively post on social media using the hashtag #SafeResearch4All.

Media, articles, reports designed or collected by UniSAFE and sister projects – namely the SUPERA project – have been made freely available in an Awareness-raising Toolkit. When sharing UniSAFE results, full acknowledgement of the project and authors must be mentioned, as stated in the introduction to the reports.

All contributions are welcome!

If you wish to share contents on the same topic, whether research results, findings, data, reflections on the issue, or examples of what your institution, region or country is doing to prevent gender-based violence in academia or research organisations, share by email at unisafe-eu@esf.org for them to be added to the toolkit.

Fighting gender-based violence in academia and research starts with bringing the issue to the surface, paving the way for victims to speak out, and for all students and research staff to be proactive role models in this respect.

We use cookies on our website to give you the most relevant experience by remembering your preferences and repeat visits. By clicking “Accept”, you consent to the use of ALL the cookies.
Cookie settingsACCEPT
Manage consent

This website uses cookies to improve your experience while you navigate through the website. Out of these, the cookies that are categorized as necessary are stored on your browser as they are essential for the working of basic functionalities of the website. We also use third-party cookies that help us analyze and understand how you use this website. These cookies will be stored in your browser only with your consent. You also have the option to opt-out of these cookies. But opting out of some of these cookies may affect your browsing experience.
Necessary Always Enabled
Necessary cookies are absolutely essential for the website to function properly. These cookies ensure basic functionalities and security features of the website, anonymously.
Functional
Functional cookies help to perform certain functionalities like sharing the content of the website on social media platforms, collect feedbacks, and other third-party features.
Performance
Performance cookies are used to understand and analyze the key performance indexes of the website which helps in delivering a better user experience for the visitors.
Analytics
Analytical cookies are used to understand how visitors interact with the website. These cookies help provide information on metrics the number of visitors, bounce rate, traffic source, etc.
Advertisement
Advertisement cookies are used to provide visitors with relevant ads and marketing campaigns. These cookies track visitors across websites and collect information to provide customized ads.
Others
Other uncategorized cookies are those that are being analyzed and have not been classified into a category as yet.
SAVE & ACCEPT
Skip to content